ОТ РЕДАКТОРА
Arno Khidirbegishvili to John Bass: “One for the Road…” (An open letter from SAKINFORM Editor-in-Chief to US Ambassador to Georgia)

On March 12 2012 a staff member of the US Embassy to Georgia administration put on your desk my open letter that had been delivered to the Embassy by DHL that morning.

In my letter written in decent English, I, Editor-in-Chief of the SAKINFORM News and Analytical Agency, told you a real detective story about an assault that was made on me on March 2 2012 in the presence of the police and my agency staff just becuse I was the first one from Georgia to congratulate Vladimir Putin with his presidency.

I also published the open letter on the Georgian and Russian sites of www.saqinform.ge, yet without the attachments: for the sake of Georgia’s national interests I sent the attachments only to you and to the ombudsman, as well as to the police investigator, as they contained incontrovertible evidence against the perpetrators, also confirming their antistate activities.

Thus you received exhaustive evidence of a group of mercenaries working for the acting authorities and under the shelter of the law-enforcement agencies. The group consists of Russian-speaking internet-saboteurs trained in different Russian mass media as well as of ex-KGB officers conducting subversive activities on the Caucasus and in Russia. By the way, I was not the first to discover the group but rather your predecessor, former US Ambassador to Georgia John Tefft, as he himself reported to the US Department of State back in 2008.

Now you received extensive evidence of how members of this group (many of these libertarians and representatives of both sexual and religious minorities) called for physical violence against dissentients and for practicing McCarthyism in Georgia, openly propagated xenophobia, instigated interethnic tensions, rejected tolerance and advocated for neo-fascism, encouraged genocide in South Ossetia and Abkhazia, called for new wars …

It is no secret that you are believed to be the unofficial governor of Georgia, yet this is not why I addressed that letter to you. As you might have noticed reading the attachments to the previous letter, the group of the secret informers working for at least two secret services (you should know which ones) refer to you as the ‘Supreme Arbitrator’, which I don’t think you really are.

By the way, do you have any guess about who they refer to as ‘the Great Democratizer’? Maybe this is the one whose orders sent to their doom thousands of Georgians, overcrowded prisons with tens of thousands prisoners, and made hundreds of thousands our fellow countryman stray around the world in search of a living?! Everyday these people are arrested by the police of different countries for theft, robbery, prostitution, drug trafficking, illegal border crossing and other crimes. WHAT HAS MADE THESE PEOPLE LEAVE THEIR MOTHERLAND IF THE US HAVE TURNED GEORGIA INTO THE GLOBAL ‘LIGHTHOUSE OF DEMOCRACY’ AND ‘AN ECONOMIC LEADER’ IN THE NINE YEARS? Mr. Ambassador, I hope you don’t think that Georgians are natural born vagabonds, inclined to thefts, prostitution, drugs and gangsterism?!

They say, before becoming a diplomat you used to be my counterpart, a newspaper editor. It is not our friendship that makes me write this letter: similar to your predecessor, you and I have just exchanged a couple of words and business cards at receptions in different embassies. I was at closer quarters with Mr. Richard Miles, though I did not share his views. So I’m sure that Mr. Miles would have responded more actively to such a glaring unprecedented fact of open and dirty insults to the journalist staff, including women, and breaking in the office in the presence of police officers… I hope you understand that the perpetrators are rather the black sheep members of the Georgian nation!

Yes, immediately after my open letter was delivered to the US Embassy, the saboteurs stopped cursing online, but protection from them was not what I expected from you, but rather a clearly formulated evaluation of the incident and oversight over further actions of the Georgian police and the Prosecutor’s Office that have been developed with billions of US dollars paid by US tax-payers!

By the way, on March 28 the Georgian Parliament adopted amendments to the Georgian Criminal Code that rendered as aggravated crimes those offenses that are committed on the basis of race, skin color, gender, sexual orientation, gender identity, age, religion, political and other views, restricted abilities, citizenship, national, ethnic and social belonging, origin, property status, place of residence or other discriminating reasons. Yet both the Prosecutor’s Office and the police refused to proceed with investigation to my claim as they saw ‘no signs of offence’ in the case, in violation a whole number of provisions of the Georgian law.

Do you think they would have found ‘signs of offence’, had a similar incident occurred because of my congratulations not to Mr. Putin, but, say, to Mr. Obama?! And how would you have reacted in such a case?

Soon you’re going back to Washington: what would you say about Georgia in the Department of State? What would you write in your report? Namely, about the democracy in Georgia, about protection of fundamental human rights and freedoms, about journalist safety and freedom of media, about the rule of law and impartiality of court, about the election system and nonexistent economy? Would you report that the reforms in Georgia have been a success?! Don’t you think that somebody in Washington is like a roulette player who does not want to admit he has lost everything and is placing the last bet hoping to win back?

Or maybe the democracy is not so important, but the major thing is that the once dignified Georgian nation is successfully being turned into a cowardly manipulated crowd driven by animal instincts?! Maybe the main thing is that minorities in Georgia can insult the majority, homosexuals can offend the heterosexuals, sectarians and libertarians can affront the Orthodox Christians and their Patriarch, teenagers can insult the elderly, including their own parents?! IS THIS THE GEORGIA YOU NEED?! IS THIS THE DEMOCRACY THAT THE UNITED STATES WANTED TO BUILD WITH BILLIONS OF US DOLLARS, YOUR EXCELLENCY?!

You are leaving a country where those at power or close to it have the impunity for any crime, and where those who are not are unprotected and can be killed or imprisoned!

You are leaving a country whose authorities can see ‘no signs of offence’ in assaults, threats and insults against journalists;

Do you consider these as Georgia’s steps towards integration with Europe?! WOULD SUCH GEORGIA BE ACCEPTED TO NATO AND EU, MR. AMBASSADOR?!

Here is my kind advice to the Department of State: before the anti-US attitudes in Georgia become nonreversible and very aggressive, as it has already happened in other countries, please just admit that your ‘Gay Georgia Project’ has failed, because there is still Arno Khidirbegishvili and others in Georgia, and we are the majority! Just control the oncoming parliamentary elections, but without NDI and IRI, and keep the zonder-groups, the mishamachavariani’s and the khatunagogorishvili’s off the elections, and you will see it’s true.

Do you know what I want? You came to Georgia not even knowing where you were going, and I do want that at least leaving Georgia you would understand Georgia, the Georgians and the Georgian people. In the three years you have spent in Georgia, have you ever watched Rezo Chkheidze’s Soldier’s Father? If you have, try to remember the moment what the soldier’s father, private Makharashvili is talking to a vine … This is the secret of the Georgian nation – whatever happens, however scared, bribed, embroiled, killed, manipulated we could be – every real Georgian has a CODE in his heart, and the code is activated when Georgia is close to destruction, and then the Georgians throw off everything that is irrelevant, alien, mentally imposed! And today is exactly the moment: so please proceed as usual, Mr. Ambassador, and express your disturbance, concern or the like!

P.S. On March 5 in Batumi you complained about the lack of curiosity and professionalism among the Georgian journalists and said you were sorry that they never asked you ‘difficult questions’.

I hope the questions I’m asking in my Open letters to you are difficult enough, so I’ve written this letter as well in a decent English and will have it delivered to you by express-mail, so that you would respond to it.

And here is One for the Road: when you take your personal belongings from your office in the Embassy, please leave this letter together with my previous one on your desk for the new US Ambassador – I think it would be useful for Mr. Richard B. Norland to read them.

With my best wishes to You and Your Spouse, 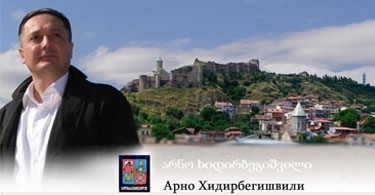